What Are Featured Snippets?

One thing that separates one company from another in the search engine results pages (SERPs) are featured snippets. If you manage to obtain this coveted spot, your traffic is going to increase exponentially for that specific keyword. It means that Google has essentially deemed you worthy of being an authority on the subject. But before we dig into what featured snippets are, we should go over a couple of other things.

What Are SERP Features and What Makes Them Different?

Google SERP features are not traditional organic results because they add an extra layer to what is deemed a normal result. SERP features may be broken into four categories:

Each form of SERP features has its own visual signifier, but some are very subtle.

With the rise of Google AdWords, most people will see paid results without even realizing it. The only signifier is a small green box with the word “Ad” inside of it. The most common types of AdWord ads appear at the top or bottom of the SERP and above or below organic results. For more information on whether or not AdWords is right for your business, check out our blog post on SEO vs AdWords.

Ads have two benefits: the first being that your business appears in a prime location and the second being that they push organic results down the page and can impact CTR (click-through rates). So this means you could theoretically appear before an establish brand and disrupt their audience.

According to Google, “Ads are ranked primarily based on how relevant and useful they are to what the person searched for, your bid, and a few other factors.”

You’ll notice that ads at the top of the SERPs are giving preferential treatment and typically include more information than ads that appear at the bottom of the SERPs (although this may vary).

Sometimes when you search Google and ask a question you are greeted with extracted from a website. This means that Google wants to answer your question but the exact answer isn’t in the core Knowledge Graph. So Google searches their index for relevant content and creates a special class of organic result.

Since featured snippets are organic, have higher CTRs than traditional organic results, and aren’t replaced by AdWords, they are highly coveted.

Knowledge Panels (or the Knowledge Graph) are different from everything we’ve covered so far because they’ll typically appear as a side bar to the right of a desktop search. They’re built using data from a number of sources, extracted from Google’s index, and private data partnerships.

While you can obtain most SERP features by optimizing your site or purchasing ads, appearing in a Knowledge Panel is going to be out of reach for just about every small or medium sized business.

You can use Knowledge Panels to your advantage by closely examining which keywords are prioritized. Then you can optimize your own site around those keywords, as well as understand how Google scours the internet for its data.

The news box is also going to be quite difficult to break into unless you are from a major news publisher or at the very least one that is super relevant to the targeted keyword. The news box is made up of time-sensitive topics and may also appear in the Google News results.

If you’re interested in breaking into the news box, check out what Google has to say on the matter.

Image packs are different from the rest because when you click on them they take you through to a Google Image search. They are displayed as a horizontal row of, typically, five images. They usually appear at the top of a SERP, but they can appear pretty much anywhere on the page.

Image packs only appear when Google believes that visual content is necessary to enhance the user’s search. To optimize your own images make sure you include:

Knowledge Cards are part of the larger Knowledge Graph. They cover a lot of data, but typically deal in numbers and appear at the top of desktop SERPs.

Similar to the Knowledge Panel, Knowledge Cards are extremely difficult to appear on and they’re usually dominated by state run sites. You’ll notice that the information in the example above is provided by the United States Census Bureau.

For local SEO, there’s little greater than appearing in the local packs or local teaser packs. When your search query has local intent, Google provides you with listings that are local to your region or one that you specified (“pizza near me,” or “the best Philadelphia pizzeria”). These features are important for desktop, but they’re even more so for mobile users.

Local SEO changes more often than traditional SEO, so finding your way to the top of a local pack might prove easier for newer businesses than any other type of SERP Feature. As long as you are familiar with Google’s local space you should be able to make a splash.

Also don’t forget to optimize your Google My Business page for the best local SEO results.

Google’s Local Teaser Packs are very similar to traditional local packs with the exception that more information is provided to the user. Hotels, clubs, and restaurants normally find their way into the teaser pack and boast hours of operation, images, and reviews. Sometimes price and ratings are also available.

Again, if you have a brick and mortar location, it’s important for you to optimize your Google My Business page. Without doing so, you’re going to find that it’s difficult to appear in the first three results for any Local Teaser Pack. The difficulty spikes the more competitors you have in your local vicinity.

A Related Questions card, understandably, appears when a user asks Google a question. While it doesn’t appear for every question you ask, it appears very frequently. Google shows you additional information that it believes might be related to your search – as seen in the example below. 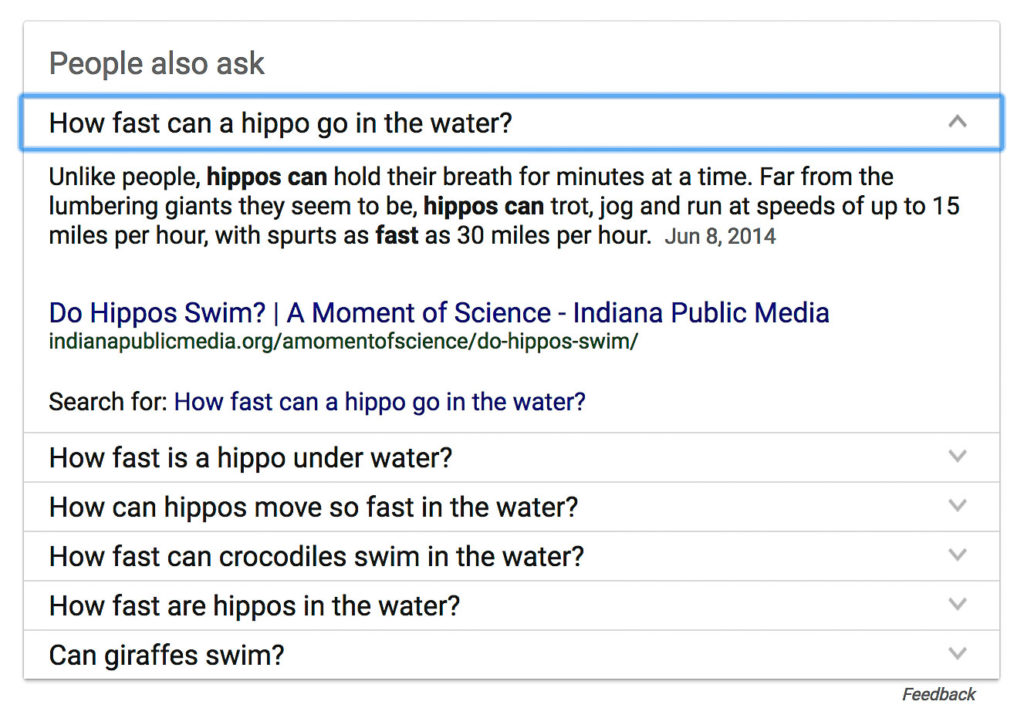 Take time to explore Related Questions that deal with keywords you’re interested in. Sometimes you can gain a good deal of information about which keyword opportunities are available.

There are certain results that display stars and rating data for products, recipes (as shown below), and other relevant items. The stars appear between the SEO title, URL, and snippet. Sometimes they also include relevant information such as reviews and cook times.

While nobody is certain which results are eligible for this type of SERP Feature, most people agree that having correct schema markup will help you.

Paid Shopping results (also called Product Listing Ads) are very similar to Google AdWords. They sell products directly to the consumer and are filled with “rich information,” as seen below (images and pricing).

Recently paid Shopping Results started appearing on the right side of the screen for desktop users. Previously it would appear in the same location as the current AdWords placement.

While you are fully capable of appearing in this section, you’ll likely be competing with large corporations such as Walmart, Best Buy, and B&H (see above example).

When users search for an exact domain (Apple, for example), Google usually displays a unique featured pack. Google may display up to 10 site links, but most fall around 4 to 6. This is an extremely dominant position to be in for any company because they can take up a vast portion of the SERP.

Most Site Link results are for large corporations, but are also obtainable for smaller businesses. The following three factors drive site link packs:

More than any other social media platform, Google seems to love Twitter. Starting in 2015, Google began displaying direct tweets from companies and people.

While not every company or person will appear in the SERPs, brand identity helps to obtain them.

Primarily YouTube videos, some results in the SERPs may display a thumbnail in the organic searches.

Only certain keywords will prompt video results and usually require video schema markup to appear in the SERPs.

Now that you know more about every type of SERP features available – including the local teaser pack, featured snippets, knowledge cards, local packs, and more. Go out there win every SERP features possible in your market and completely dominate Google for your keywords.

Want To Build Something With Us?